This piece was originally published by AdGully.

Innovations from the East is the focus of Darren Burns, President – China, Chair, Creativity & Innovation, Asia Pacific at Weber Shandwick China, who says that today, innovation is moving from East to West and western countries are getting inspired by innovations done in the Eastern regions of the world, especially China. According to him, today, China is transforming global communications and over the next few years, all commerce will be social in China and around the world. Traditional mediums like television and print are on the verge of dying out in China with the country becoming completely digital now. More and more people are digitally active, while there aren’t too many active offline consumers left. The new generation in China is exposed to digital at a much younger age.

Darren Burns was speaking at a session at the recently concluded festival for disruptive marketing and communication, Zee Melt 2017. 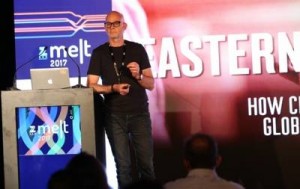 There is a demographic shift in China’s middle class and it is expected to surpass that of the United States by the year 2020. While stating that the youth in China is extremely social and digital and they spend on average 30 minutes per day on commerce websites, Darren Burns pointed out China is the world’s largest ecommerce market, where roughly half the world’s ecommerce volumes takes place and mobile accounts for 55.5 per cent of all commerce sales in the country. Chinese e-commerce value has surpassed the United Kingdom and United States combined and the country has moved beyond a marketplace to a fundamentally new consumer journey and highly sought after mobile experience. Various data show that 55 per cent of China’s internet users have made a mobile payment at least once versus only 19 per cent of internet users in the United States.

Influencers are a huge hit in China and they yield great power to influence the audience unlike any other nation. China has around 300 live platforms available which provides various content on beauty, interaction, games, education, sports, etc. Brands aggressively use influencers by doing creative collaborations with them and that ends up in a higher sales volume.While speaking about the Indian scenario, Darren Burns stated that the condition in India is just ripe now for complete digitalisation and it wont be before long that India becomes entirely digital just like China as India is the fastest growing economy and also a fast growing middle class nation. India needs to leapfrog industrialisation to digitise the economy and the content that is created here is for a diverse society which is interesting and can be a challenge or an advantage.

Darren Burns speaks at length to Adgully on innovation in communication, how India and China compare in terms of innovation, brands that have taken the risk to be innovative, and much more. Excerpts:

How would you define innovation?

I define innovation as two areas that we need to look at –how do we get better into doing things we are doing today and make incremental changes; and how do we make big changes and create new products or services that don’t exist yet in order to solve client problems in the most efficient ways. We need to focus on what’s going on in the market, if it’s a trend that nobody else is really leveraging, then we should consider getting into it and start to evolve that to solve a problem.

How different is India as a market vis-a-vis the rest of the world?

India is evolving into its own animal and is quite different from China and the US. The growth in internet and the YouTube space in terms of viral content has become a huge issue, which is very exciting. At the same time, traditional media in India continues to be very powerful. In China, you often forget about traditional media, but in India it is still growing very strongly – be it print or television. Moreover, marketers are discovering how regionalism in India is very different from China.

How do India and China compare in terms of innovation and technology?

Chinese people engage a lot more with branded content. If the Chinese see an advertisement on WeChat moments, they will like it, talk about it and comment on it. On an average, an Indian follows 12 brands on social media, whereas in China the number stands at 35. People are hyper connected with brands in China and if the brand adds some value to them, they connect and engage with the brands more. Social CRM is very popular there, but it all comes down to what value the brand brings for the consumer.

Which brands and agencies have done the most innovative stuff?

What’s happening in India and China right now is that there are a lot of niche players who are doing a lot of interesting things. Since we often lead client engagement, we work closely with our partners and we call it ‘Collaboration 2.0’. Earlier, we tried to collaborate better internally because we have many disciplines and specializations. Now we need to look externally at some of the niche and existing players and work with them or create partnerships. This is happening in films, production and elsewhere. In China, we are looking at how we can closely collaborate with data providers, because in future you won’t be able to make decisions if you don’t have data.

Which brands have taken the risks to be innovative and try new approaches?

Ocean Spray is one of our clients that has taken the risks. Also, a lot of multinational brands in China cannot succeed because they are so hung up on headquarters and getting their approvals. To be great in China – and it also applies to India – a brand must have a very localised team to be given license to do stuff. If you want go through the headquarter process, that brand will not be successful because you won’t be as good as the Chinese players as they are nimble and quick.

What key innovations have you done in the last 12 months?

We have done key innovations in influencer management – called KLOUD and developing that in China for the rest of the world. This has been very innovative because we put a lot of data around that. But what I am most proud about is C3 (Content, Community and Commerce), our social media approach from China, which will be launched in the rest of the world in July. In the old days, we just copied things from the US, but now we create our own tools, which help us in creating awareness and conversion to suit the local market.

How has communication evolved over the last few years?

The 24×7 always on phenomenon is just exhausting today, compared to the earlier days when there was no social media and you just had to buy a TVC and outdoor was quite easy to do. We at Weber Shandwick invested in social media years ago. Had we not done that, as some agencies still haven’t, then we would have lagged behind the curve. It is very difficult to build that internal culture from scratch today. We were future-focused and evolved our offerings accordingly. One must always be forward thinking. We started from taking a client brief to now trying to brief our clients about what’s happening in a particular market. Having a forward and test & learn looking approach is very essential. If clients don’t want to take any risks, they become irrelevant, because today you have to try different stuff.

How do you see communication strategies shape up over the next few years?

The hardest thing to do is to disrupt your current business, because usually a brand gets used to the same approach and resists trying out a new approach. In China, everything is on social and digital, any other channel may be a waste of time, because the audience is not looking anywhere else apart from their electronic devices. Yet, clients internally have KPIs and want the overall coverage, but it doesn’t yield anything. If we are delivering top line or bottom line results, then we are relevant, if not, then we are creating awareness for the sake of it and getting lost in the KPIs Vs actual value and stand to lose out.

In India, the internet is growing at 200 per cent and that is where a brand must invest. If you are a start-up, you will not invest in print media but instead invest in social media.