For the fourth time in five years, Weber Shandwick was named Global Agency of the Year by The Holmes Report at the annual Global SABRE Awards ceremony. Weber Shandwick is the first agency ever to sweep The Holmes Report‘s Regional Agency of the Year honours in one year, already winning top recognition in Asia Pacific, North America and Europe, the Middle East and Africa earlier in 2017.

Weber Shandwick was also presented with two Global SABRE awards for outstanding client work with partners ActionAid UK and Alba Chunkuk, which were recognised among the top 40 global campaigns of the year.

“Being recognised by The Holmes Report as the leading agency in every major region of the world this year reflects the strength of our global network – the teams across our offices who passionately and consistently deliver value to our clients, who leverage strategic communications to help solve problems and who generate results,” said Andy Polansky, Chief Executive Officer, Weber Shandwick.

“Congratulations to our people around the world, and to our client partners who inspire us to create some of the world’s most engaging and impactful campaigns year after year.”

“I am always very proud of the work that’s being done throughout Weber Shandwick’s Asia Pacific offices,” said Baxter Jolly, CEO of Weber Shandwick APAC. “To see Weber Shandwick Korea’s great work with Alba Chunkuk honoured on the world stage by an institution like The Holmes Report is a joy.”

Earlier this year, Weber Shandwick was honoured with the top ranking on The Holmes Report’s 2017 Global Creative Index, marking the second time in three years that the agency has been recognised as the industry’s leading creative firm. 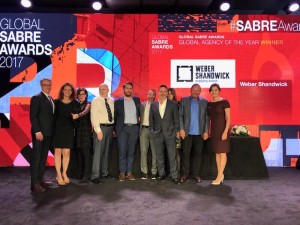